Food and Loathing in Dallas 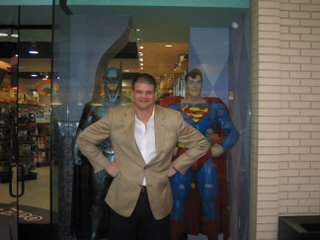 Things have gone well in Dallas. The team has a round against Univ. of Houston this morning, and if they win they probably will be in the finals this afternoon. They have done an excellent job.

On the other hand, I have been somewhat of an oaf. Last night we went out to dinner at Oceanaire, a wonderful seafood restaurant north of town. At the conclusion of the meal, I was expressing some amazement at GED3's awesome "I passed the bar" personal intake, which consisted of:

It really was an awesome display of eating prowess. At the end of my oral summary of his meal, I offered up my pretty-good impression of Fat Albert's catchphrase, a throaty (and maybe too loud) "Hey-heyyyy-heeyyyyy!"

The problem was that right as I delivered this (and without my noticing), the woman at the next table had gotten up and started to leave the restaurant. It appears that I let loose with my too-loud "Hey-heyyyy-heeyyyyy!" at the precise moment she began walking. As she passed, she gave me the most incredible, thorough, horrified look of disgust I have ever received. It was a Hall-of-Fame look of disgust, the kind that can only be delivered by a 40ish Dallas socialite who has just been given the Fat Albert treatment in a nice restaurant.

I kind of hoped that I was the only one who saw that look, but... well, there's a few students who now will have some quality material for discussions of cloddish professors.

The ironic, and perhaps scary, thing is that the woman who shot me "The Look" was in great shape (you probably have seen the type)-- tall, straight blond hair, angular, carrying at most 125 pounds over a 5' 10" frame presented in a silk shirt and tights. I'm pretty sure she has been on a treadmill continuously since "The Look," guessing my name and then cursing it.

So, here's to you, near-anorexic Dallas socialite who will relive that moment in her nightmares!

And, to the enterprising Baylor student who immediately captured my Fat Albert impersonation to use as a cell phone ringtone.

Comments:
Great food. Great company. Great stories. What more could anyone ask for?

I don't know, Martha could have maybe asked for no Gordon germs on her napkin...

But I already miss the Oceanaire!!! Reunion? Tonight? (heehee).

You forgot the creamed corn!!!

I'm going to second the reunion: Oceanaire. Friday night. After the exam. Bring your bib and your designated driver.

No. No. He forgot nothing. The list is already too long.

and mashed potatoes...and a second helping of the au gratin.

i would love to go for round 2 at oceanaire so long as Gordon promises not to use my napkin to wipe his tears and then try to put it back in my lap!

It would appear that the secret to mock trial success is (beyond lots of hard work during our finals period) to gorge ourselves at 6-hour intervals and then insult the locals. I'll make a note of that.

I can't wait to hear about his Thanksgiving feast!

I think he will probably have a whole turkey, stuffed with ham, and covered with gorgonzola, with a beer can in the middle.

did yall have a gay waiter named mason? he loves to talk about how the baked alaska is the only thing more flaming than he is. he's hilarious.

No, we didn't have Mason. We had a woman who seemed to want to bring my self-esteem back up after the unfortunate encounter with the socialite.

Hey, I just noticed this-- GED3's shadow on the window in the photo looks just like Darth Vader...